What are mast cells?

Mast cells (MC) are immune system cells that live in the bone marrow and in body tissues, internal and external, such as the gastrointestinal tract, the lining of the airway, and the skin. Everyone has mast cells in their body, and they play many complex and critical roles in keeping us healthy. The positive roles that they play include protecting us from infection, and helping our body by participating in the inflammatory process. However, mast cells are also involved in allergic reactions, from the tiny swelling that appears after a mosquito bite to a life threatening, full-blown anaphylaxis.

Mast cells have within them small sacs, or granules, surrounded by membranes. The sacs contain many different kinds of substances called mediators, which participate in all of the roles above, including allergic response and anaphylaxis.

The mediators are selectively released when there is an allergic or mast cell-based reaction.1 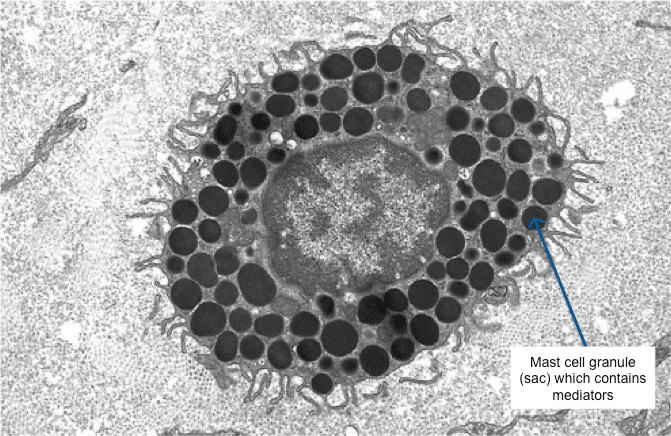 There is a difference between someone who is healthy, with mast cells that are functioning normally, and someone with a mast cell disease, whose mast cells may be activating inappropriately in response to triggers, or may also be proliferating and accumulating in organ tissues.

What are mast cell diseases?

Mastocytosis has been defined in the literature as an abnormal accumulation of mast cells in one or more organ systems. Previously classified by the World Health Organization (WHO) as a myeloproliferative neoplasm, mastocytosis is now classified in its own category under myeloid neoplasms.7 Broadly separated into three categories, cutaneous mastocytosis (CM), systemic mastocytosis (SM) and mast cell sarcoma these diseases occur in both children and adults. CM is considered a benign skin disease representing the majority of pediatric cases. In 67-80% of pediatric cases seen, resolution will occur before or in early adulthood.8-10 In pediatric mastocytosis, symptoms of mast cell mediator release may occur systemically as a result of mast cell mediators released from skin lesions.10 This, however, does not necessarily indicate systemic disease. The incidence of systemic pediatric disease was previously unknown, but systemic forms have now been proven to exist in some children.8-10 The majority of adult patients are diagnosed with systemic disease. Skin involvement, typically maculopapular cutaneous mastocytosis/urticaria pigmentosa, is common in adult patients and can provide an important clue to accurate diagnosis.11, 12

CM is diagnosed by the presence of typical skin lesions and a positive skin biopsy demonstrating characteristic clusters of mast cells. The preferred method of diagnosing SM is via bone marrow (BM) biopsy. The WHO has established criteria for diagnosing SM, summarized18 as follows:

b Activating mutations at codon 816, in most cases, KIT D816V

Recognition by specialist physicians of the importance of mast cell activation in disease led to an international Mast Cell Disorders Working Conference emphasizing this topic in September of 2010. Consensus statements were published regarding classification of and diagnostic criteria for mast cell diseases,6 where mast cell activation plays a prominent role.

Mediators produced by mast cells have a considerable effect on specific symptomatology. Symptoms, including, but not limited to flushing, pruritis (itching), urticaria (hives), headache, gastrointestinal symptoms (including diarrhea, nausea, vomiting, abdominal pain, bloating, gastroesophageal reflux), and hypotension (low blood pressure), allow a patient to meet the first of three required co-criterion for systemic mast cell activation when the patient exhibits symptoms involving two or more organ systems in parallel, which recur, or are chronic, are found not to be caused by any other condition or disorder other than mast cell activation, and require treatment or therapy.6, 28

The second required co-criterion for systemic mast cell activation depends on documentation that mast cells are directly involved in the symptomatology. An increase in the serum level of tryptase, above baseline and within a narrow (generally accepted as one to two hour) window of time after a symptomatic episode, is proposed as the preferred method for providing evidence of mast cell involvement according to these criteria.6, 28-30 The consensus article provides a method for calculating the required minimum rise in serum tryptase.6 After a reaction, a level of serum tryptase that is a minimum of 20% above the basal serum tryptase level, plus 2 ng/ml, will meet the second criterion listed above for a mast cell activation event. Consensus members also agreed that when serum tryptase evaluation is not available or when the tryptase level does not rise sufficiently to meet the required increase for the co-criterion, other mediator tests could suffice. A rise in urinary n-methyl histamine, is considered an alternative for the co-criterion related to a requirement for a mast cell mediator level rise during a systemic mast cell activation event.6

TAMS wish to acknowledge The Mast Cell Diseases Society (TMS) as the original authors of the above information. Reproduced with permission. View original source on the TMS website.

TAMS will use the information you provide on this form to be in touch with you and to provide updates and marketing. Please confirm your subscription in the confirmation email you will receive shortly. You can unsubscribe at any time.